Staying on the case

There have been times lately when keeping up this enquiry in the love of power and the power of love have been emotionally onerous. Last week was one of them.

I am trying to learn how to take note of events and evidence and not necessarily to open up each topic. i.e. present them here with images and links as a way of holding them in memory, as moments, points in history.

Next week in the UK (November 22-28) is to be anti-bullying week.  A government supported initiative to applaud, though the impression could be gained from this offical site that bullying only happens in school. Nevertheless, it's a great start.

'How long does it take to demolish a house?

It takes a year to build it. Sometimes a hundred years. And there are some houses that have always been there.

One shove and its gone. A hole gapes in the familiar landscape and the family that had substance and a name and an address and human beings of all ages and relationships –has in the blink of an eye become an example…

At night, no one sees where the destroyed family has gone. No one knows what they are doing now. And where they are sitting now – in some corner, uprooted with their possessions, under heavens empty and heavy, is anything being noted down about them in some corner there now?'


This extract is from a new report just released by B’Tselem entitled, "Through No Fault of Their Own" revealing that the number of houses demolished as a punitive measure in the Occupied Territories is twice as large as Israeli officials claim. Ostensibly, the demolitions are aimed at Palestinians who carried out, or were suspected of carrying out, attacks against Israelis. In practice, the primary victims are family members who are not suspected of any wrongdoing.

Iraqi hostage(s) This was the week in which Margaret Hassan appears to have been murdered in Iraq. The emotional low point of the week for me was this item on the front page of US Today (14th October 2004)

and then days of silence in the media when, having heard there were two known western women hostages in Iraq, Margaret Hassan, and Teresa Borcz Khalifa, a Polish woman (who was freed November 19th), I failed to find any mention of this murder. Margaret Hassan was not blonde, so who is this woman? A week later I have still found no reference to her death. And what does the level of damage she appears to have suffered tell us about the quicksands of despair and hate that oppression can generate?

155mm US Artillery firing on Falluja
155mm is a little over 6 inches. The US forces were firing into Falluja apparently from several miles out of town with this weapon. What possible justification can there be for such indiscriminate violence?

My concern at the repeated TV news footage of US artillerymen firing several 155mm rounds a minute was echoed, it turns out, by BBC reporter Paul Reynolds, who also asked why:


I have questioned many times senior officers here about the use of heavy weapons because they have been using 155mm artillery in Falluja, they have been dropping 2,000 pound bombs. The bullets that they fire are high velocity. The buildings are of poor construction here - the bullets travel through the walls. And when they see what they believe to be militants - and these marines are incredibly calm under fire, they are almost unflinching - they do wait until they see a guy with a gun but when they see that, they open up with everything they have got and the question is, how much collateral damage is there going to be?


Falluja casulties
Yes I know these pictures from al Jazeera are hard to look at, both feature children, but there are others that are worse. And this last week images of the civilian casualties of the assault on Falluja have been notable by their absence from the newsmedia I see.  Here is an al Jazeera report on civilian casulties early in the November post-election assault on Falluja. 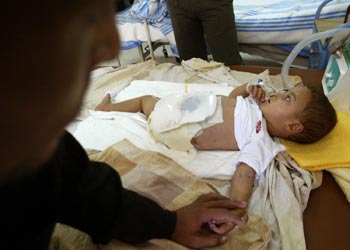 N.B. Despite American and Iraqi provisional government smears and physical attacks, Al Jazeera is an ex-BBC outfit that holds a very even-handed Arab view of events in the Middle East.

US soldiers kill wounded men in Falluja
The NBC video of US soldiers shooting a wounded rsistance fighter in Falluja seems to have disappeared but these four frames from it... 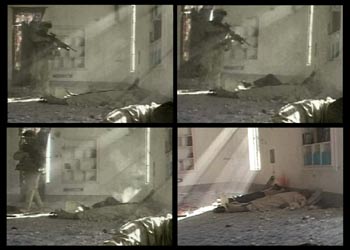 ....convey the casual brutality of men so stressed out by training and indocrination that they can see defenseless wounded opponents as 'unmenschen', having 'lives devoid of value'... so that, as here inside a mosque, they can kill them.
Here from the blog of Kevin Sites, the freelance cameraman who filmed the shooting, is his open letter to the marines involved.

Iraqi suicide bombers—who are they?
One of the features of the armed struggle going on in Iraq that seemed to be entirely invisible to the media I read is the sheer numbers of people who are prepared to kill themselves in opposing the US attack and occupation. I haven't counted but it seems like more than one a day, week in week out.

Is it possible that these men are remnants of the Saddam Hussein regime? Why kill yourself to bring him back? If not, how come these men have to wear the label 'insurgents', bought into by all the media I read. Considering the numbers and frequency of suicide bombing, what a strange label, one that seeks to tell us  that they are 'outsiders'—not indigenous people so infuriated by the violence of the US attack and occupation that they are willing to kill themselves to reverse it?

Perhaps, as other men have down the centuries, including the American and British troops occupying their country, they are dying for God and Country. What else could this many men willing to kill themselves mean?

As I have written elsewhere here, suicide bombing, whether at bus stops, in airliners, or cars, is a weapon that at a stroke obsoletes the most fancy techno precision weapons of the alienated, if courageous patriots, of the UK and US military.

Hunting
Yes, domination does sometimes seems to be an immovable a feature of the landscape and then, as with hunting, years of courageously indignant people-pressure win through, and a corner of domination is rolled back. 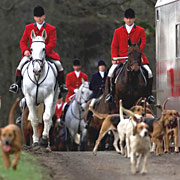 Amid bizarre scenes of procedural confusion, the UK Parliament voted this week to stop the hunting of foxes for fun in the UK.

To appreciate fully why this is significant in the UK, you need to understand that hunting is a remnant of feudal i.e. fullout baronial domination, sustained by the rich and powerful in the UK for a thousand years. The British royal family are blood sports enthusiasts, and for social climbers and the landed gentry, hunting has remained a jewel in the crown of the seigneural/aristocratic tradition.

Hunting, with its ceremonial dress and the blooding of new recruits, has always seemed to me an archetypal example of dominance in action. The fight to keep hunting in the UK hides a covert agenda—"hands off our hereditary power and wealth".

The fightback, by the House of Lords, initially unsuccessful, will no doubt be followed by other pressures from the feudal wing of the Countryside Alliance. Labour's Baroness Mallalieu, who is also Countryside Alliance president and who led opposition to the Bill to ban hunting with hounds in the House of Lords, said the Hunting Bill was "rank bad", adding: "Its foundations are naked prejudice and wilful ignorance, it is without rationality and without principle". Comments that it struck me, apply only too well to hunting itself.

In October 2004, the number of children and minors under 17 killed by the IDF has climbed to 33.  An Israeli officer, who in October shot a 12-year-old Palestinian child in Rafah in southern Gaza 20 times to ascertain that she was dead, was arrested briefly but only on suspicion that he lied about the incident.

Many, or most, Palestinian children killed have been on their way to school or have been have been imprudently stoning the Caterpillar Inc. bulldozers that demolish their homes. 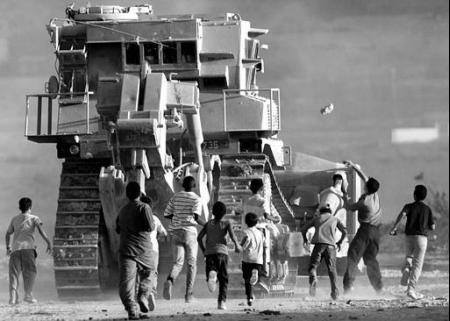 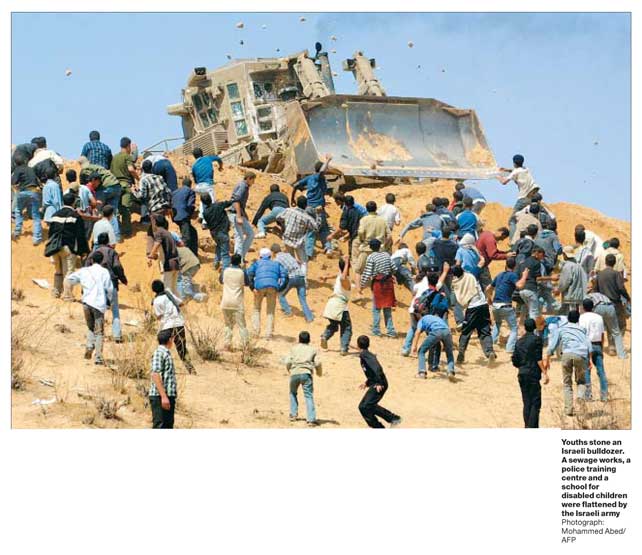 There are 0 writeback comments for this entry