Part of the intention of this inquiry is to be able to juxtapose items that might not usually seem related but which appear to support the notion that domination is ubiquitous, threaded through the grain of the time. So that the connections, once seen, increase the chances we can make a move from bullying and coercion to love and cooperation.

A nearby church is flying the Crusader flag of St George, again, the last time was during the world cup.

Curious at a time when Islam is in the news so often and for so many different reasons that the Crusader flag should have come to occupy so much public attention. 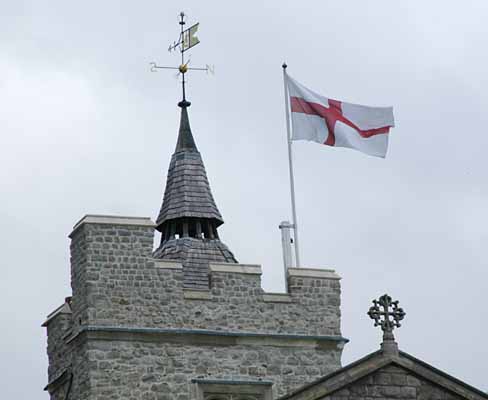 It's not as though many of the thousands of football fans are likely to have any conscious understanding of the history that their nationalist emblem carries but perhaps they understand unconsciously that, both in the tribal world of 12th Century European warlordism that spawned the Crusades, and the domesticated versions of it that soccer embodies, the Crusader flag remains an emblem of 'us' and 'them' dominance, of overcoming the infidel, the 'other', the foreigner.

More on that later.

P. sent me a cutting from the Daily Mail (p15 Sept 21 2004) that she thought I ought to see. In an article entitled 'Iraq: Is Tony away with the fairies?', Steve Glover points to Blair's 'Messiah complex' quoting his 2001 Labour conference speech that referred to the Congo and Rwanda.

'This is the moment to seize. The kaleidoscope has been shaken. The pieces are in flux. Soon they will settle down again. Before they do let us reorder the world around us' 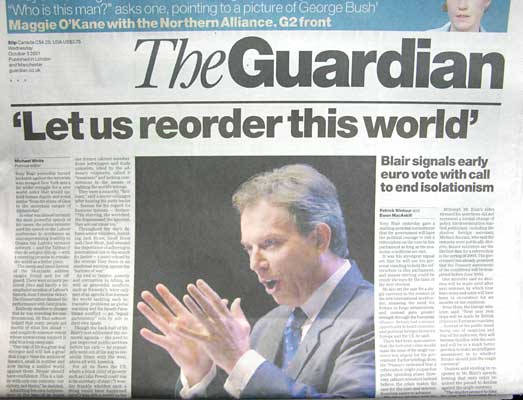 I was reminded of another image from another century. How easily the lessons of history can be forgotten. 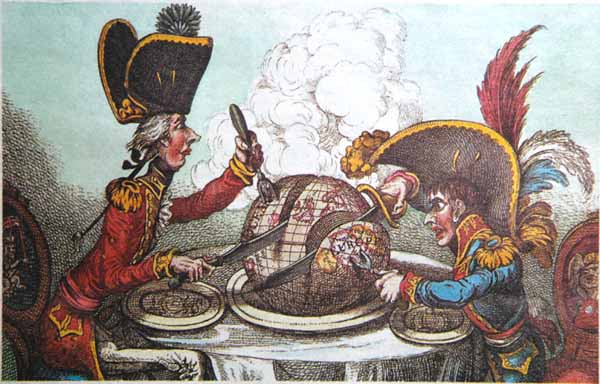 Gilray: The Plum Pudding in Danger - Pitt and Napoleon carve up the world

This historicity, forgetting or passing over, or simply being ignorant of the inconveniently horrible aspects of how the the present distribution of power in western society came into being does appear to be part of the entrancing stories that dominant elites tell. For example I have tended to see the US as a late-comer to, or even outside imperial ambition. Leaving aside the Roman antecedents, France, Britain, Germany, Holland, Spain and Portugal (did I miss anybody?) showed the way. And the US, leaving aside the Chilean intervention; it's Cuban conspiranoia and the Vietnam adventure, appeared to have clean(ish) hands.

John B. Judis in Imperial Amnesia in the July/August issue of Foreign Policy details the chequered history of US imperialism and shows how the amnesic trance quality of the recent actions of the US administration belong to a long-standing US tradition that combines the use of force and evangelism. I'll pull a quote or two here but do read the whole text.

The Philipines
As Judis recounts, George Bush made a speech to the Philipine Congress on October 20 2003 that credited the US with transforming the Philipines into a democracy:

“America is proud of its part in the great story of the Filipino people,” said Bush. “Together our soldiers liberated the Philippines from colonial rule.”

As many Philippine commentators remarked afterward, Bush's rendition of Philippine-American history bore little relation to fact. True, the U.S. Navy ousted Spain from the Philippines in the Spanish-American War of 1898. But instead of creating a Philippine democracy, the McKinley administration, its confidence inflated by victory in that “splendid little war,” annexed the country and installed a colonial administrator. The United States then waged a brutal war against the same Philippine independence movement it encouraged to fight against Spain. The war dragged on for 14 years. Before it ended, about 120,000 U.S. troops were deployed, more than 4,000 were killed, and more than 200,000 Filipino civilians and soldiers were killed. Resentment lingered a century later during Bush's visit.

Judis goes from this echo of current events in Afghanistan and Iraq to outline the historical context for it. He calls it Divine Interventionism. At the end of the 19th century...

... by taking over parts of the Spanish empire, the United States became the kind of imperial power it once denounced. It was now vying with Britain, France, Germany, Russia, and Japan for what future U.S. President Theodore Roosevelt called “the domination of the world.”

There was active American interest in standing tall as a military power and a need to find someplace for US capital to find a home...

But proponents of imperialism, including Protestant missionaries, also viewed overseas expansion through the prism of the country's evangelical tradition. Through annexation, they insisted, the United States would transform other nations into communities that shared America's political and social values and also its religious beliefs. “Territory sometimes comes to us when we go to war in a holy cause,” U.S. President William McKinley said of the Philippines in October 1900, “and whenever it does the banner of liberty will float over it and bring, I trust, the blessings and benefits to all people.”

This belief, as Judis explains, was at the heart of the US establisment. Woodrow Wilson, later president of Princeton University and President of the US, defended the annexation of the Philipines in 1901...

“The East is to be opened and transformed, whether we will or no; the standards of the West are to be imposed upon it; nations and peoples which have stood still the centuries through are to be quickened and to be made part of the universal world of commerce and of ideas which has so steadily been a-making by the advance of European power from age to age.”

...the imperialists of the 1890s believed the United States could create an empire that would eventually dwarf the rival European empires. The difference would be that America's empire would reflect its own special values. Indiana Sen. Albert Beveridge and the Protestant missionaries advocated “the imperialism of righteousness.” God, Beveridge contended, has made “the English-speaking and Teutonic peoples . . . . master organizers of the world. . . . He has made us adept in government that we may administer government among the savage and senile peoples. Were it not for such a force as this the world would relapse into barbarism and night. And of all our race He has marked the American people as His chosen nation to finally lead in the regeneration of the world.”

As Judis outlines, by the early years of the 20th century, this notion of American empire had faded and President Woodrow Wilson had moderated the vision in favour of dismantling imperialism...

...as the United States proved barely capable of retaining its hold over the Philippines. Wilson didn't merely change U.S. foreign policy; he changed its underlying millennial framework. Like Beveridge, he believed the United States was destined to create the Kingdom of God on Earth by actively transforming the world. But Wilson didn't believe it could be done through a U.S. imperium. America's special role would consist in creating a community of power that would dismantle the structure of imperialism and lay the basis for a pacific, prosperous international system. Wilson's vision earned the support not only of Americans but of peoples around the world.

The only way to prevent future war, Wilson concluded, was to dismantle the colonial structure itself. His plan included self-determination for former colonies, international arms reduction, an open trading system to discourage economic imperialism, and a commitment to collective security through international organizations, what is now sometimes referred to as multilateralism.

Sadly two World Wars, a Cold war and countless local armed conflicts intervened to sideline this version of democracy as practice rather than fig leaf.

As the 21st century dawned, the neoconservatives adopted Wilson's vision of global democracy, but they sought to achieve it through the unilateral means associated with Beveridge. They saw the United States as an imperial power that could transform the world single-handedly. But the neoconservatives and George W. Bush are likely to learn the same lesson in the early 21st century that Theodore Roosevelt and Woodrow Wilson learned in the early 20th century. Acting on its own, the United States' ability to dominate and transform remains limited, as the ill-fated mission in Iraq and the reemergence of the Taliban in Afghanistan already suggest. When the United States goes out alone in search of monsters to destroy—venturing in terrain upon which imperial powers have already trod—it can itself become the monster.

John B. Judis is a visiting scholar at the Carnegie Endowment for International Peace. This quote are from an essay based on his forthcoming Folly of Empire: What George W. Bush Could Learn from Theodore Roosevelt and Woodrow Wilson (New York: Scribners, 2004)

Here we go - here we go
If the aspect of the crusader tradition that John Judis outlines seems out of reach (as well as being out of control!) then a reminder that the spellbinding trance of imperial righteousness may not only be out there in 'them' but also in 'us' is perhaps in order.

Thus in conclusion, back to the Daily Mail. On the back of the Steven Glover article I mentioned earlier was an obituary of Brian Clough, a renowned UK football manager who died recently.

Clough, famous for his egocentric arrogance, described himself as 'Old Big 'Ead'. He had, as Richard Pendlebury writes, a famous 'directness of approach',

'If I had an argument with a player, we would sit down for 20 minutes, talk about it and then decide I was right'.

Other legendary stories celebrating Clough's domineering style included this one:

'he (Clough) returned home one freezing December night after a match and climbed into bed where his long-suffering wife Barbara was already asleep.
'God, your feet are freezing' she complained.
'Eh, love, you can call me Brian in bed,' he replied.

A few lines later in the article, after describing how as a punishment Clough had once made his football team run through a nettle bed, Richard Pendlebury continues:

His treatment of Justin Fashanu, for whom he'd paid Ł1 million, was particularly savage once he discovered that his new signing was probably gay - taboo even now in a football dressing room. Fashanu's career never recovered and many years later he committed sucide. (my emphasis).

I wonder why I am so surprised that to be gay would still be taboo in professional football. I mean, come on Denis, what would you expect? All that heroic, testosterone charged 'masculinity'... how could it accommodate such a contradiction as same sex love?

However domesticated the violence on the field in football's nationally and internationally acclaimed spectacles, if Richard Pendlebury is correct, domination appears to run deep and untouched in the veins of the soccer industry. Reflecting, reinforcing, and upholding I suppose, the veins of domination running through the football supporting population.

There are 0 writeback comments for this entry