One of the most shocking moments of my life was to visit Berlin in the 60's and stand looking over the Wall. I was impressed less by the wall itself than the wide swathes of bare earth, the electrified fencing, barbed wire and the armed border guards in their towers. My feelings of shock, I now suppose, were due to the confrontation with raw power, state power, domination—in one of the forms I am coming to recognise through this enquiry—the extreme vulnerability of East Germany dressed up in invincible, impenetrable, Stalinist armour.

Why this memory? Why now?

Floating out of the churning hurt of this morning's news and trying find my place in it.  Again.

Came images of other walls, other fences, other locked gates. Other armouring.

Out of order. Mixed up.

A completed section of the [Israeli 'separation] barrier’s' first phase, near the town of Qaffin (pop. 8,200), July 2003. Although the barrier’s exact elements differ according to location and topography, its core is an electrified fence, 10 feet high, equipped with surveillance cameras and other sensors. It is flanked on either side by six-foot-tall barbed-wire pyramids. Other obstacles include a trench six to eight feet in depth, a military patrol road, and a dirt path to record footprints. The barrier’s total width ranges from 60 to 100 yards. © 2003 Miranda Sissons/Human Rights Watch 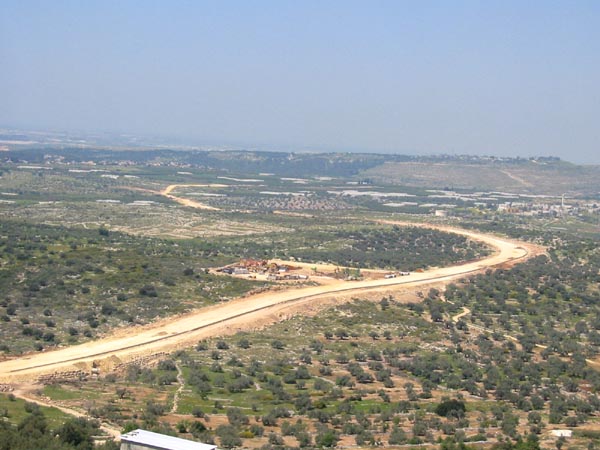 View of the barrier’s path from Jayyus (pop. 3,078), in Qalqilya governorate, April 2003. According to the U.N, residents of Jayyus have been separated from four water wells and two-thirds of its total land area by the barrier, harming agriculture, incomes, and livelihoods. Residents in at least 35 other communities have been separated from their land by the barrier’s first phase. © 2003 Miranda Sissons/Human Rights Watch Here in Northumberland around 1800 years ago,  the Romans, finding themselves vulnerable to incursions by the barbarian Scots, also armoured themselves. They built the 73 miles of Hadrian's Wall. View of the wall, looking east towards Housteads Camp © Denis Postle WLR A section of the Israeli "Separation Barrier" at Qalqiliya under construction. 1.3 million refugees live in Gaza one of the most densely populated areas of the world. 8000 Israeli "settlers" occupy a third of the land, control access to much of the water and enjoy a network of roads built and maintained exclusively for their own use. Palestian refugees face increasingly severe and often arbitary restrictions on even local travel. An Israeli soldier locks one of the gates in the separation barrier near the town of Qalqilya, July 2003. The city of Qalqilya and surrounding villages and towns have been particularly hard hit by the barrier, affecting some 45,000 residents. © 2003 Agence France Presse, Text: Human Rights Watch

click on the picture for the BBC's picture allery of the aftermath of the Israeli attack on Rafah.

Building the "separation barrier" and establishing a no-go zone 300 meters on either side of it has entailed countless gross violations of Palestinian human rights.

As the Human Rights Watch report "Razing Rafah" that has preoccupied and distressed me today details, the Israeli administration's mix of punishment, revenge and reprisal as they created and extended a buffer zone around Rafah meant over the past four years that 10% of the population, 16,000 people, lost their homes, being reduced to picking over the rubble of their homes for traces of their possessions, and for many, living in tents.

Along with vast swathes of gratuitous damage to orchards, greenhouses, a zoo, and other infrastructure, the armada of American equipped Apache helicopters, tanks, F16 fighter bombers and armoured D9 Caterpillar bulldozers,  wrecked 298 house in May alone.

According to the Palestinian Central Bureau of Statistics, 393 residents of the Rafah governorate were killed between September 29, 2000, and August 31, 2004, including ninety-eight children under age eighteen ... In the same period, Palestinian armed groups killed ten Israeli soldiers in Rafah.  One was killed while patrolling the border, in February 2001; four others were killed during incursions inside the camp.  The other five soldiers were killed on May 12, 2004, when Islamic Jihad fighters destroyed an Israeli armored vehicle with a rocket-propelled grenade. The IDF invoked this latter incident to justify the further expansion of the buffer zone through wholesale demolition of homes.
Human Rights Watch

A Distant Mirror?
Faced yet again with the grotesquely disproportionate violence visited on the Palestians by the Israeli administration... I wondered again... where had I previously felt upset in the way I have today?

In the early 80's while researching a film about human nature, I visited KD Dachau outside Munich. Even though it is now mostly an empty space, it brimmed over with echoes of the pain, hurt, damage,  and death visited on the people unlucky enough to be incarcerated and tormented there.
"Work makes freedom" reads the sign on the gate which welcomed people to Dachau. Industrial strength cynicism. In the museum, what brought tears was a picture of a woman with a young child also on the wrong side of a fence, unmenschen, people deemed to have lives devoid of value. The following day I travelled to KD Mauthausen, one of two dozen concentration and slave labour camps near Lintz in Austria. What had began as a film location search became a pilgrimage, as inadvertently, I arrived in Linz in the middle of the night. As I sat with others in the station waiting for morning, armed policemen prevented any of us  from sleeping. No sympathy for weary vulnerability there.
I found KD Mauthausen profoundly moving. Unlike Dachau, so much of it was still there that less was left to the imagination.  In a touching re-occupation, as though by the souls of the dead, large parts of the camp are encrusted with ceramic images of the mainly Italian but also Dutch and Russian people who were killed there. For a sharp lesson in the what cultures of domination can mean I recommend a visit. Don't miss the nearby Schloss, a medieval castle, where the Austrians collected and gassed all the disabled and 'mentally retarded' children of the Lintz neighbourhood. ApartHate It may seem too big a jump and I am open to being contradicated, but as I try to look at the big picture, what Israel seems to be doing, albeit I believe unconsciously, with the separation barrier and its astonishingly excessive use of force, coupled with abuse of power at check points, etc., in a bizarre inversion of Jewish history... is to turn Gaza into a concentration camp.

Despite its theological claims, even a brief look at its history shows Israel to be an ill-founded colonial creation, still the occupier of land stolen from the Palestinian people, who continue to object to this theft and who seek justice and restitution.  Feeling vulnerable but in deep denial of the origins of their vulnerability, many, but not all, Israelis, institutionalize their vulnerability, moving it from being acute to chronic. And in pursuit of a some dream of military invulnerability, armour themselves so effectively that they can crush generation after generation of Palestinians while failing to feel for their hurt or their sorrow or their distress. This Israeli denial morphs, rebounding as hate-driven Palestinian martyrdom.

How can it be that we tolerate this of Israel? That for so long, and I include myself, so many people bystand it?

The Spell of Security
For some years, even though I have been burgled and mugged, I have been very sceptical of the preoccupation in the UK with what I think of as 'security as a form of unconscious impoverishment'. We apparently have many more security cameras than any other country.

Here below, not far from where I live in London is another armoured settlement.  Is it a prison? A nuclear weapons research establishment? Or a secure hospital for the mentally challenged? Or a hugely expensive riverside housing? Guess... Seemingly at war with its surroundings, it is a 'gated' housing development, one of perhaps hundreds, even thousands, in the UK. Could it be that our tolerance and bystanding (no economic boycott, no trade sanctions) of the Israeli's denial of vulnerability and culpability and their bizarrely excessive armouring that so damages the Palestinians... arises because the cultures of domination (and exclusion) we inhabit have a lot of it in-house? 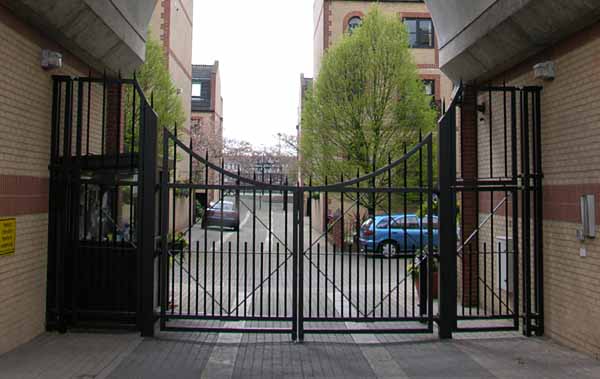 So far as we entranced by the belief that we need impregnable, invulnerable, armouring as a way of being in the world (the gate in this West London housing development even has a guard post) might we not be replicating in ourselves the denial and armouring (and psychological ignorance) that feeds and sustains the Israeli/Palestinian conflict and the supposed clash of cultures between Islam and the West?

Might this be why bystanding, passive acceptance of the intolerable, is so common?

Footnote
Feeling something of the pain of a far distant people is no guarantee of the accuracy of how we respond to it.

In honour of the complexity of the struggles between vulnerability and armoured denial, and modernity and pre-modern fundamentalism, I include this link (double-click the image) to a story about another Wall.

Police try to prevent a woman from disturbing Women of the Wall, right,
while they pray at the Western Wall in Jerusalem, Oct. 15.


For almost 15 years, Women of the Wall — a prayer group that includes women from all streams of Judaism — has been struggling to break the Orthodox hegemony at Judaism’s holiest site, fighting for both legal and social acceptance, hoping to be able to read from the Torah, wear tallitot and pray out loud next to the venerable retaining wall of the Holy Temple.

Their presence challenges an Orthodox tradition that only men are allowed to take part in these practices... click on the picture to read more.


There are 0 writeback comments for this entry